Fishermen spotted the divers, among seven women who went missing Friday, some 20 kilometres (12 miles) from where they set off for a diving expedition but could not rescue them because the waves were too high.

But one of them was later rescued by a helicopter, which also dropped food to the stranded divers. The four others were being picked up by a rescue boat and would be taken to Semawang beach in southern Bali.

“There were five found atop a large coral reef,” Rudi Tjandi, an official from the Bali disaster agency, told AFP.

“The waves and current were quite strong, so the fishermen who spotted them couldn’t approach.”

He said they were found at Manta Point off the west coast of Nusa Penida island, just east of Bali. 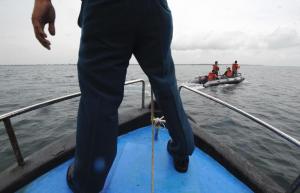 A Navy rescue team searches on February 17, 2014 for the Japanese scuba divers who went missing off  …

They had set off on a dive expedition Friday from the Mangrove area of Nusa Lembongan, an adjacent island. The shortest route to where they ended up was around 20 kilometres.

Local police chief Nyoman Suarsika also said that they were found in the Manta Point area.

Officials had no news of the other two missing divers.

At Semawang beach a group of 20 Japanese people, including relatives of those missing, were seen sitting at a restaurant. One woman was crying and the others refused to be interviewed, an AFP journalist at the scene said.

Four ambulances were waiting next to the beach for the divers to arrive, while dozens of Balinese people had also gathered. 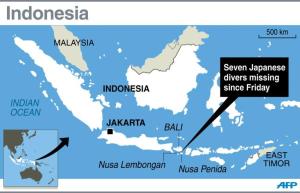 A search involving about 100 people has been under way since the divers’ disappearance, with rescue efforts hampered by heavy rain and strong winds earlier Monday.

“I’m praying for her safety,” the mother of missing instructor Shoko Takahashi told reporters in Japan on Sunday before leaving for Bali, according to the Yomiuri Shimbun daily.

“She is an active person with a dependable personality. She never does foolhardy things.”

Takahashi and her husband had set up the operator known as Yellow Scuba that took the divers out on the trip, said Japanese consular official Kenichi Takeyama. 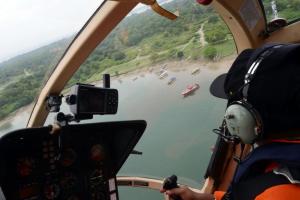 Takeyama said Yellow Scuba had provided boats and staff for the search.

The women were experienced scuba divers who had logged more than 50 dives each.

The dive boat’s skipper said he was following the divers for some 20 minutes before a sudden downpour made the water cloudy, according to Japan’s Asahi Shimbun newspaper.

This entry was posted in Uncategorized. Bookmark the permalink.